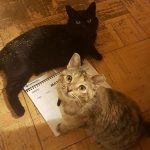 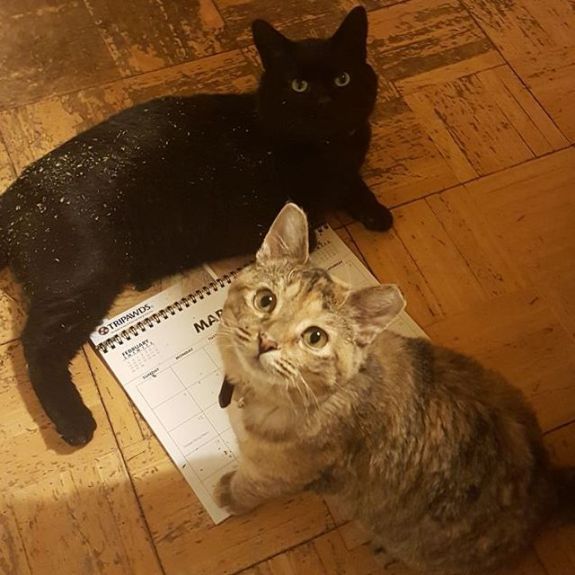 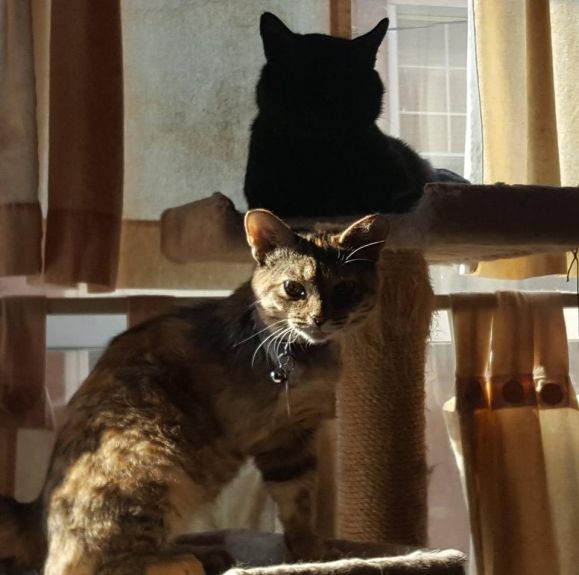 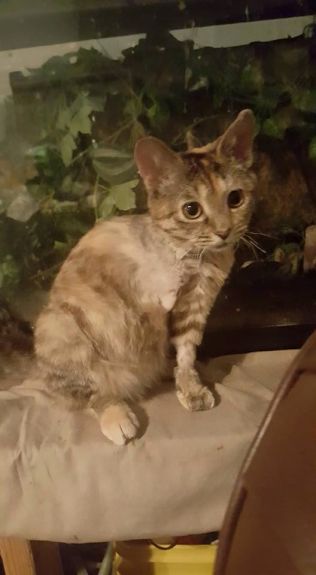 Once Romeo and Juliet had met, their true journey began.  They were close to a month apart in their amputations.  They play and wrestle and play and LOVE running up and down all the steps in the house (all 4 levels) chasing either one another or toys or both.

We have 9 cats total now, with the addition of Romeo and Juliet… 3 dogs and 2 turtles.Many are special needs.  We also have a cat with no eyes, Doc Watson who, like them, you would never know he was different.  over the past 5 years we have seen all kinds of special needs cats in foster here.  Unlike humans, animals seem to adapt and go about their business with out knowing they are any different. We can learn a lot from them.  They are forgiving of their pasts and carry on.  Not letting the absence of a body part, or an ailment get in the way. Watching them play and knowing that they are happy is worth their weight in gold.

I work in a specialty and emergency animal hospital as a Vet Assistant, and many times I think that the procedures are harder on the parents, than on the animals them selves.  People are always amazed when they come in and are wondering how the animal will adapt or what they need to do, how will they get around etc.  I always am happy to talk to these people, and assure them thru stories, picture and videos that their animals will most likely lead a very normal life! Watching them go from scared to reassured that there is hope, and bc of their love and commitment, their animal can continue to be THAT part of their family.  I am thankful that I can share this community for them to read other stories and find help and answers when they need them.

Juliet, aprox 3 month old DSH stray, was presented in the emergency clinic I work for with a severely broken front leg, with lacerations back in Sept 2016. Even with all the pain that she was obviously in, this girl was nothing short of a total lover! After a few weeks, it was deemed that amputation was going to be necessary for this girl.

I offered to take her into foster care, as I have done special needs fostering for a shelter I had worked at for several years, as well as had Romeo, a new tripawd, already at home healing. I took her home a day post op and she, like Romeo, never let anything keep her down. It took no time till she had explored every inch of the room, from the cat tree to the windows to each and every toy.  She LOVED chasing the ball in the track. One would never know she was a new amputee!

Until she was fully vaccinated, spayed and vetted, I was keeping her separated from the rest of the population in our foster room.  It was during this time that she and Romeo had made a special bond thru the room separation.  They would coo and talk to one another, tho never meeting. Once she was fully vaccinated, I had let her and Romeo meet, and it was love at first sight! And that is when the TRUE love story began! 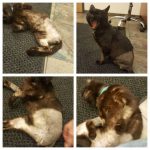 Romeo, a 3.5 year old DSH, was transferred to a shelter for medical attention after it was learned that he had been severely abused.  He was kicked and beaten, had hair loss, and weighed only 4.5 pounds. He was transferred to an emergency and specialty hospital to access and hopefully correct his healed wounds. He had has a broken leg/hip that had healed in a very wrong position, as well as facial fractures.  It was deemed that his only option was for amputation of his rear leg and hip.

I had fallen in love with him, and being a foster for the shelter, I took this guy into foster.  He had stolen everyone’s heart that met him.  I was a bit afraid, that since the abuser was a male, that he might have issues with accepting his foster dad. So we were prepared for this possibility. Instead, this guy accepted and loved him, as he did with each and every person and animal he met. This guy did not know how to play, and his body condition was poor. He had a long road ahead of him, but we could tell, he was a fighter. He deserved a chance to learn to be a cat, experience unconditional love in a way that he obviously had not gotten.

His acceptance of his missing leg was null. He came into foster with me the day after his amputation, and was like, IM HOME!! He ate, he drank, he explored and he healed.  It was 2 days later, I was looking for him, and found he had made his way into the cat tree as well as the window seat. Nothing was going to stop him.  It was just 2 months prior that we had lost our cat Zeus, just a few months shy of his 20th birthday.  So we decided that Romeo was here to stay and to add to our fur family. He accepted all the cats and dogs and even the turtles, with out as much as a blink.

He is now 9.5 pounds, with a full, thick shiny black coat and as happy go lucky as they come.  He plays and has finally had the chance to become a CAT. He is also now a Blood Donor, helping to save the lives of others.

About Your Tripawds Blog:

New Tripawds Bloggers: Please review your default first blog post at left for lots of helpful links for getting started with your blog or review the Help Videos in your dashboard. Edit these widgets from your Appearance settings to remove this notice, upload a custom header photo, or choose from 130+ themes, and much more!

Romeo and Juliet is brought to you by Tripawds.
HOME » NEWS » BLOGS » FORUMS » CHAT » YOUR PRIVACY » RANDOM BLOG